What Is Character Education

The term ‘Character Education’ might appear self-explanatory, however, there is no widely accepted definition across the education industry.

This is a huge problem and the lack of an “agreed-upon” definition is the biggest restraint on widespread adoption and government funding. A clear, established framework would enable educational establishments, charities and youth service organisations to adopt a consistent approach to gain more traction.

Here are two definitions from the big players in the field: The Government and The Jubilee Centre.

“An approach to developing a set of values, attitudes, skills and behaviours that are thought to support young people’s development and contribute to their success in school and in adult life.”               Department of Education

The Jubilee Centre, University of Birmingham

Picking the key points out of these definitions, character education can be described big picture as an approach to developing a set of values, attitudes, skills and behaviours, or what might be referred to as character traits, which can help young people’s development, personal and interpersonal note, and help to guide them when they think and act, contributing to their success and happiness in school and life. Typically, the traits we’re talking about are:

Every individual person is responsible for their own character. Clearly home life has a major impact, but schools also play a critical role in the formation of young people’s attitudes, shaping the character of their students.  Support and supervision can help young people to develop their sense of purpose and positive health, education, employment and social outcomes, which are key components of wellbeing and the ability to have successful relationships.

There is a growing base of academic research, literature and jargon around the subject matter, led by The Jubilee Centre for Character and Virtues at the University of Birmingham, which has been responsible for building a comprehensive formal framework for understanding and implementing character education. The framework groups different skills into the archaic-sounding ‘Virtues’, described as ‘Intellectual’, ‘Civic’, ‘Moral’ and ‘Performance’; integrating and developing these can result in ‘flourishing’. This is illustrated in the graphic below: 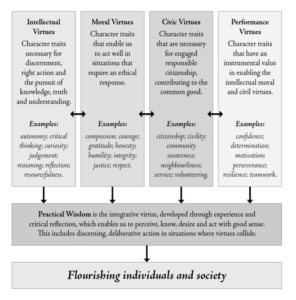 We all want to flourish in life, but it’s hard to teach this stuff. As Siddhartha in Hesse’s novel wends his way to the ultimate meaning of existence, he concludes: “Knowledge can be communicated but not wisdom. One can find it, be fortified by it, do wonders through it, but one cannot communicate and teach it.” He’s got a point! Much of the thrust of the Jubilee guidance is to stimulate awareness and self-awareness through the art of reflection. This might involve undoing values adopted from elsewhere.

Character education is not a new idea, it’s just that the relentless quest for exam grades since the advent of league tables has crowded it out over recent years. Rowing back, in 1944 when the founding principles of the purpose of education were set out in the Butler Act, there was an inclusion for the development of “character and competence of great people”. This 1944 Act forced local education authorities to contribute towards the ‘spiritual, moral, mental and physical development of the community’ and subsequent legislation refined and strengthened this as ‘spiritual, moral, social and cultural development’, or SMSC. As Susan Cain points out in Quiet ‘before the industrial revolution American self-help books extolled character. Nowadays it’s personality.’

The early nineties’ priorities focussed more on the content of the curriculum and testing pupil attainment. However, more recently, the Government and educators have come to the realisation that ‘success’ in exams has many negative consequences such as mental health issues and no guarantee of a good job. The focus needs to shift to developing well-rounded, confident individuals who make a positive contribution to society.

According to the Jubilee Centre, the key principles are that a ‘good life’ is one in which a person develops and practises virtues, and that character traits develop through habits; character can, according to the catchphrase, be ‘caught, taught and sought’. How does this work in practice? In most schools, character education has been implicit, that is, the character traits are ‘caught’ and a way of catching it is through ‘role-modelling and emotional contagion’; that’s where the teacher is a ‘person of good character who also exemplifies commitment to the value of what they teach’ and that’s supported by everyone being onboard. Principles of character can be ‘taught’ at school by identification and discussion in lessons, so that ultimately, with new sharpened awareness, they can be ‘sought’ freely by students.

Cognitive ability is only one component which determines a child’s life chances and intelligence is hard to measure and can change considerably through a lifetime. However, a person’s character and application can really shape their destiny. Character is not inherent; it is born of positive and negative experiences and it can be taught by promoting and encouraging self-awareness and reflection.

A quote from an article on the Purpose of Education written by one of history’s great characters and agitator for social justice, Martin Luther King, sums up the sentiment du jour: “intelligence plus character is the goal of true education.”

Want to find out more information?
Book your demo here